The main role of the City Archives is to manage government records with long-term business value. The City of Vaughan Archives also collects, preserves and makes available for research permanently valuable non-government records from the Vaughan community that document the rich and diverse heritage of the City of Vaughan. Every month we’ll share pieces of Vaughan’s heritage in a regular feature called The Way We Were.

To view more from the City’s archival collections, visit the City of Vaughan’s Facebook page. 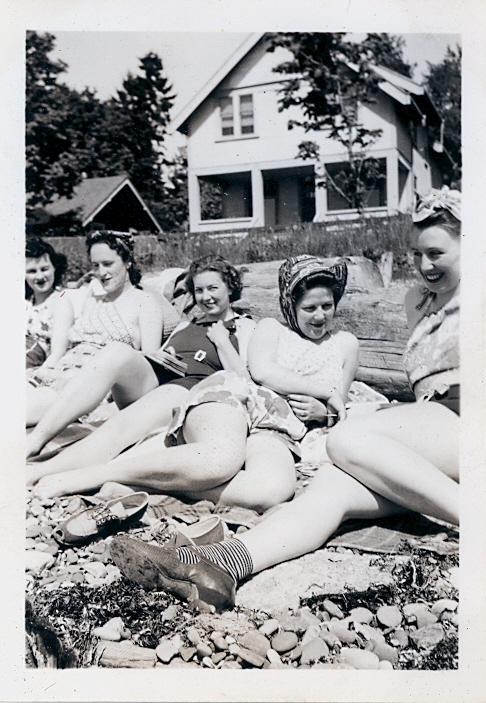 This photo from the Janet Berton collection pictures Janet (née Walker) with her sorority sisters in the summer of 1940. The picture, titled “Potential Ziggfields” [sic] shows members of the University of British Columbia’s Alpha Delta Pi Sorority during a camping trip in Vancouver. In Vaughan, Janet Berton is remembered as an influential member of the Kleinburg community for her avid involvement in various organizations and historical groups, including Heritage Vaughan, the Kleinburg Binder Twine Festival, the Canadian Federation of University Women, the Kleinburg Area Ratepayers Association and the Local Architectural Conservation Advisory Committee, to name a few. As the wife of noted Canadian author, well-known television personality and journalist Pierre Berton, Janet and her husband continue to be remembered for their impact on Vaughan and the community of Kleinburg today.

The Pinecrest Speedway fonds is a graphic collection consisting of images of the racetrack and vehicles from 1949-50. The speedway, which was built by Charles Greenly in the mid-1940s, was located on the southeast corner of Highway 7 and Jane Street until it ceased operation in the mid-1960s. Following the Second World War, track racing became largely popular in Southern Ontario, with racers driving on both paved and dirt tracks, and often utilizing local fairgrounds. As racing increased in popularity, more paved tracks began to be constructed to allow for safer driving conditions. Pinecrest Speedway was one of the earlier tracks to be built in Ontario, and saw many additions and renovations over the years.